What Are The 5 Pillars of Islam For Kids? 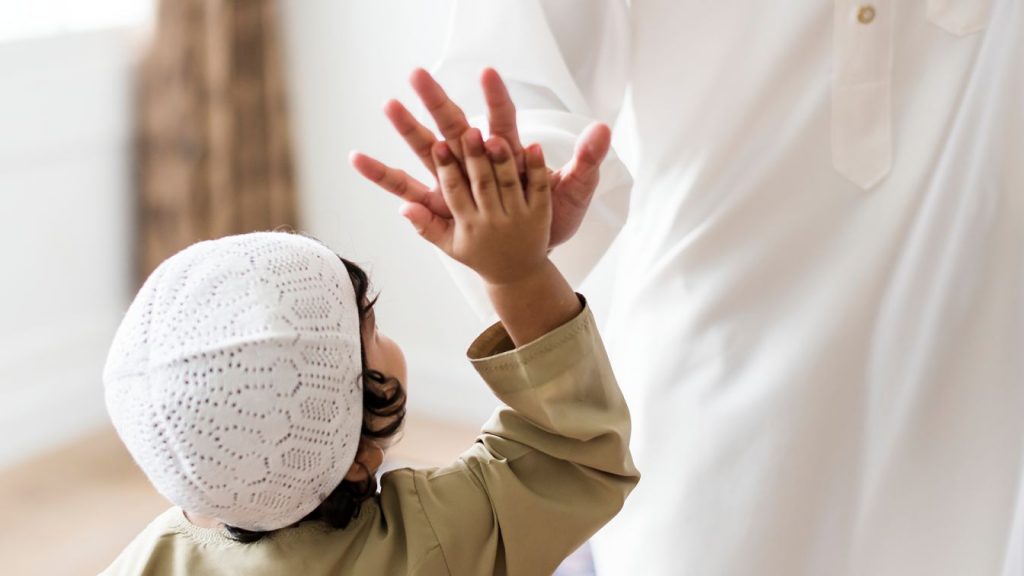 What Are The 5 Pillars of Islam For Kids?

Muslims worldwide embrace the 5 pillars of Islam, regardless of ethnic, regional, or sectarian diversity. To be a real Muslim, you must adhere to the Muslim five pillars and never, ever disregard them.

Noor Academy will walk you through a simple tutorial of the 5 pillars of Islam and their meanings in order to teach them to you kids, despite their age.

What Are The Five Pillars Of Islam And What Do They Mean?

The five pillars of Islam are the fundamentals of Muslim beliefs that we should all commit to and teach our children at a very young age.

When your kids learn about the pillars of Islam, they grow up to commit to them and pass them on to other generations of Muslims.

So, what are Islam’s five pillars and what do they imply? The five pillars of Islam are the profession of faith (shahada), prayer (salah),

Upholding the pillars is regarded as necessary for all serious followers of the Prophet Muhammad (Peace Be Upon Him), male and female,

Sunni and Shi’a, although it does not imply that all Muslims do so regularly.

Circumstances change, as they do in all religions, and some people are more dedicated than others. Age, stage of life,

employment, family obligations, health, and money all have a role in how much you commit to these practices.

What Are The 5 Pillars of Islam In Order?

The 5 pillars of Islam in order come as follows:

“There is no God but Allah, and Muhammad is His Messenger.”

It differentiates Muslims from followers of other religions. It is necessary to recite it three times in front of witnesses before becoming a true Muslim.

It’s the number one step in becoming a Muslim, so it comes first in order.

Salah is the Islam rituals prayer in which all Muslims submit to Allah’s will. Five times a day, prayer is offered in the direction of Mecca.

Friday is designated as a day for congregational salah (Juma).

It’s one of the things that crucially set muslimeen and non Muslim apart, as the Muslim who doesn’t perform salah is not considered a true Muslim.

On the authority of Jaber bin Abdullah Al-Ansari and his father, Prophet Muhammad (PBUH) said:

“Between a man and disbelief and polytheism is leaving prayer.”

Zakat is an alms-giving compulsory contribution from Muslims to people in need. There are 8 categories for which we can pay zakat.

and for freeing captives [or slaves] and for those in debt and for the cause of Allah and for the [stranded] traveler – an obligation [imposed] by Allah. And Allah is Knowing and Wise.”

Islamic charities encourage supporters to use their services to alleviate suffering and help refugees, victims of natural disasters, the urban poor, and individuals in conflict zones.

Dismissing Zakat is a huge sin in Islam. Abu Huraira (May Allah Be Pleased With Him) reported that Prophet Muhammad (PBUH) said:

“There is not a day upon which the servant awakens but that two angels descend. One of them says: O Allah, repay one who spends in charity!

The other says: O Allah, destroy one who withholds charity!”

Sawm is fasting in English. During Ramadan, the ninth month of the Hijri calendar, Muslims are expected to fast. It holds a great position in Islam. Prophet Muhammad (PBUH) said:

“Fasting is a shield or protection from the fire and from committing sins.”

Muslims should abstain from eating and drinking, sexual activity, and smoking during daylight hours,

which vary depending on the time of year in which Ramadan falls. After sunset, Muslims break the fast with a meal (iftar).

It is critical to explain to your children that the old, sick, pregnant, or breastfeeding women are excluded and that children, like themselves,

are not forced to participate until they grow up.

Completing the Hajj, or pilgrimage to Mecca, is an obligation that Muslims should do at least once in their life.

Before embarking on the journey, all pilgrims should be in good bodily and spiritual health.

muslimeen execute a sequence of individual and group acts on the several days of their pilgrimage in Mecca,

following a pattern established by our glorious Prophet Muhammad (PBUH).

How Does The Quran Support The Five Pillars Of Islam?

The five pillars of Islam were mentioned in the Holy Book of Allah SWT since al Quran al Kareem was sent down to establish the religion of Islam and its fundamentals that we’re living on till now.

Shahada was mentioned in all Quran al Kareem in several positions, directly and indirectly. Some of these positions are:

“Say, [O Prophet,] “I am only a man like you, ˹but˺ it has been revealed to me that your God is only One God. So whoever

hopes for the meeting with their Lord, let them do good deeds and associate none in the worship of their Lord.”

Salah was also mentioned in more than 60 verses in all Quran al Kareem, being the second most important pillar of Islam. These verses include:

“Who believes in the unseen, establish prayer, and spend out of what We have provided for them, And who believe in what has been revealed to you, [O Muhammad], and what was revealed before you, and of the Hereafter, they are certain [in faith].”

“Your ally is none but Allah and [therefore] His Messenger and those who have believed – those who establish prayer and give zakah, and they bow [in worship].”

“And to establish prayer and fear Him.” And it is He to whom you will be gathered.”

“But if they repent, establish prayer, and give zakah, then they are your brothers in religion; and We detail the verses for a people who know”

Zakat comes in directly after Salah which is one of the fundamentals of Deen. it’s also mentioned right after Salah in al Quran al Kareem as a part of Surah Al Ahzab. Read the following verse:

“Establish regular prayer and give Zakat, and obey Allah and His messenger.”

“O you who have believed, decreed upon you is fasting as it was decreed upon those before you that you may become righteous.”

The fasting rules and regulations were described later in the same Quran chapter as well:

“[Fasting for] a limited number of days. So whoever among you is ill or on a journey [during them] then an equal number of days [are to be made up]. And upon those who are able [to fast, but with hardship] – a ransom [as substitute] of feeding a poor person [each day]. And whoever volunteers excess – it is better for him. But to fast is best for you, if you only knew.”

Hajj was also mentioned in Surah Al Baqarah along with its laws and regulations.

“Hajj is [during] well-known months, so whoever has made Hajj obligatory upon himself therein [by entering the state of ihram], there is [to be for him] no sexual relations and no disobedience and no disputing during Hajj. And whatever good you do, Allah knows it. And take provisions, but indeed, the best provision is fear of Allah. And fear Me, O you of understanding”

And from Surah Al Tawba:

“So travel freely, [O disbelievers], throughout the land [during] four months but know that you cannot cause failure to Allah and that Allah will disgrace the disbelievers”

Do you want your kids to learn more about their religion through al Quran al Kareem? Sign them up for online Islamic studies for kids courses on Noor Academy and watch them grow on the love of Allah, His Prophets, and al Quran al Kareem.

What Are The 6 Pillars of Iman?

Iman means ‘faith’ in English. After learning the five pillars and fundamentals of Islam, your kids need to learn the six pillars of Iman.

The pillars of Iman are essential in strengthening our faith in Allah SWT and His religion.

Believing in Allah is believing that there is only one God worthy of praise, with no partner or son. This is referred to as Tawheed.

It is also to believe totally in the manner he is depicted in al Quran al Kareem, Sunnah, and Allah’s 99 names.

The belief in Allah’s angels is the second pillar. They are not his children, contrary to popular belief.

They were formed from light before humanity for the sake of worshipping Allah SWT.

The third pillar is to trust in Allah’s writings, which are transmitted to the world through the messengers.

Books were revealed to Allah’s prophets as a source of instruction and proof for mankind.

These books are The Scrolls, The Psalms (Zaboor), The Torah (Torah), The Gospel (Injeel),

and al Quran al Kareem which was sent with the last Prophet Muhammad (PBUH).

The fourth pillar is to believe in all prophets and messengers sent by Allah SWT and admitting that the prophet Muhammad (PBUH) is the last of them all.

Except for Prophet Muhammad, who was sent to guide all of mankind, most of Allah’s prophets were assigned to a single nation.

When reciting the names of any of the Prophets, Muslims are obligated to give salaams (Peace and Blessings of Allah).

Allah has set a time frame for the entire cosmos, the conclusion of which will be the last hour.

Humans will be questioned by Allah SWT about their actions in this life during the final hour.

Those whose good actions outnumber their evil actions will be admitted to heaven,

while those whose evil deeds outnumber their good ones will be condemned to hellfire unless they died in the state of Islam.

Doom (Qada’) is Allah’s general decree that every human will die, but a divine decree (Qadr) is a specific decree of Allah or the implementation of Qadhaa’,

that a specific individual would die at a certain time and place.

As a result, believing in this pillar implies believing that Allah created everything and predetermined its correct proportion.

The 5 Pillars of Islam For Kids Activities

You can teach the pillars of Islam to your kids in fun interactive ways that can encourage them to learn more.

You can also sign up for Islamic studies for kids online courses at Noor Academy and let them learn all about their religion with Noor Kids!

These activities can include:

PreviousIslamic quiz questions and answers | Noor Academy
NextWhat Is Idghaam With Ghunnah And Idghaam Without Ghunnah?