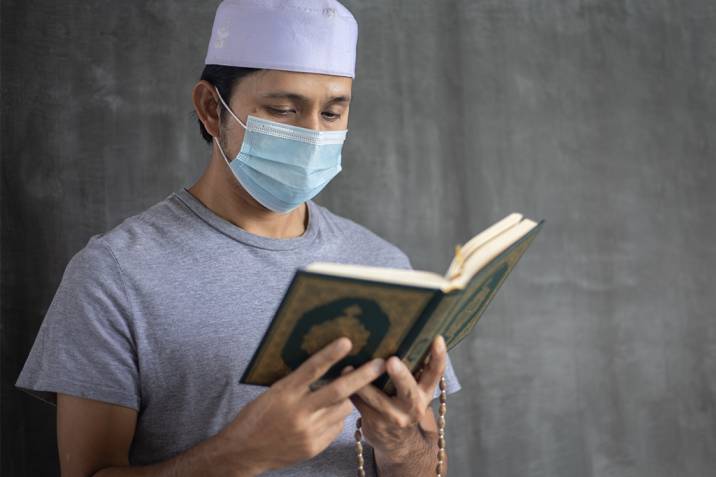 The global impact of the Coronavirus or COVID-19 pandemic is thought to be the worst in this century. Civil, medical, and governmental organizations cooperate to raise awareness about the problem and how to stop it. The religious entities have been playing the same role by highlighting Islamic teachings during these tough times which have been taught by Prophet Muhammed (PBUH) hundreds of years ago.

Islam, being a complete religion and the only sufficient guide ever sent to mankind, has all the answers to any problem we might encounter. So, if we pay close attention to Islamic Studies and lessons, we will know how to properly react in such chaotic times in order to save ourselves while also receiving a reward for obeying Allah’s commands.

“There has certainly been for you in the Messenger of Allah an excellent pattern for anyone whose hope is in Allah and the Last Day and [who] remembers Allah often.”

muslm all around the world must be aware of Islamic teachings and how to properly apply them during the COVID-19 pandemic.

Some of the guidelines that muslm were asked to follow hundred of years ago include:

These golden teachings dispel the vast majority of misconceptions that have surfaced in recent months about how muslm should deal with the pandemic.

Some people believed it was forbidden (haram) to stop praying at mosques, while others trusted Allah to protect them while engaging in risky behaviors,

such as contacting others, not wearing a mask, not taking medicine, and so on.

It was the role of religious leaders and state institutions across the Middle East to fight these misconceptions with direct quotes from al Quran,

and Hadith (Prophet Muhammad’s statements) and to spread the right Islamic teachings.

Islam has set cleanliness and Hygiene as a part of its teachings since forever. So washing your hands, wearing clean clothes,

sitting in a clean place, and eating “pure” food have all been part of Muslim lives for centuries.

In times of the pandemic, health authorities have announced that washing your hands and keeping them clean is a number one precaution to protect yourself from coronavirus.

That aligns perfectly with what Allah wants us to do all the time not just during a global pandemic.

It’s known that praying in mosques is favorable in Islam, especially Salat Al Juma (Fridays Prayers) as long as you’re physically able to go to the mosque.

However, when health officials declared that no congregations would be held in order to prevent the spread of the virus, religious authorities confirmed the necessity of this.

Even when mosques reopened, social distancing was applied. 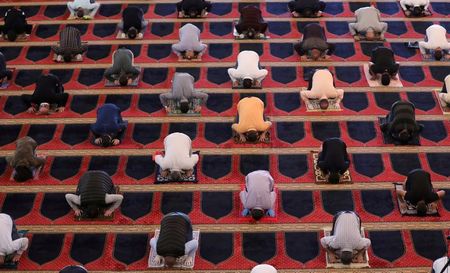 Social distancing in mosques after it reopened.

Some people tried to ignore that saying that closing Allah’s houses (mosques) is not something Allah wants.

That is when Islamic scholars responded with Prophet Muhammad’s attitude whenever there was heavy rain or wind,

as well as how the words in Adhan (call for salah) were changed. Instead of saying “Hayya ‘ala al-Salah” (come to prayer),

the muadhin (the person who announces the Adhan) says “al-Salatu fi buyutikum” (pray in your homes).

Ramadan, Pilgrimage, and Eids are very sacred and special occasions for Muslims around the globe.

However, with the presence of a fatal pandemic, celebrations and rituals may not be the same.

Following the precautions of no gatherings, Muslims should stay at home during Ramadan and break their fast within their small family not to risk being infected.

Some people suggested breaking fast virtually via online video calls. As sad as that is, it’s necessary to obey Allah’s words of causing no harm:

“And spend of your substance in the cause of Allah, and make not your own hands contribute to (your) destruction, but do good; for Allah loveth those who do good. (195)”

Islamic Pilgrimage (Hajj) is performed by about 2.5 million every year. However, the gathering of this many people in one place will produce undesired consequences.

The Saudi government announced on June 22, 2020, that the 2020 Hajj pilgrimage would be held, but only for a limited number of pilgrims residing in Saudi Arabia,

so, taking social distancing into consideration. As a result, the pandemic’s impact in Saudi Arabia has been limited, with a mortality rate of 0.9%. 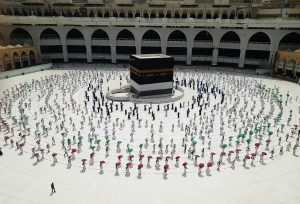 Social distancing during Tawaf in Hajj season during the pandemic

Eids are also occasions when Muslims gather and celebrate either the end of fasting (Al-Fitr) or in Hajj (Al-Adha),

which honors the willingness of Ibrahim to sacrifice his son Ismael as an act of obedience to God’s command.

The holy celebration where Muslims visit each other and pray Salat Al-Eid was also canceled to follow the precautions of COVID-19.

Islam has taught us to follow the laws of the country they live in as long as we are not ordered to practice something that is against Shariah.

“It is necessary upon a Muslim to listen to and obey the ruler, as long as one is not ordered to carry out a sin”

As a result, in the current pandemic situation, Muslims must follow the instructions issued by government officials, or they will be considered sinful.

This advice aligns with the underlying objective of Shariah (Islamic Law) to preserve life.

The five underlying objectives of the Shariah are explained by scholars to be the preservation of:

Check out Imam Al-Amidi’s words upon this “The rules have only been prescribed for the benefit of His servants.

The fact that they have underlying purposes and wisdom is grounded in both consensus and reason.” – [d. 631/1233]

Meaning that you should neither harm other people nor yourself. This can be applied today to people who don’t follow the precautions and risk being infected or infecting other people.

Preserving life in the case of a pandemic can also be applied to taking medicine when you get sick.

A major misconception is that taking medicine is contrary to relying on Allah to heal you. Let’s reflect on what Prophet Muhammad (PBUH) said when asked about this:

“Yes, you may use the medicine. Allah has not created any disease without also creating its cure, except one: old age (aging).”

To survive the pandemic we need to follow the precautions in order to protect ourselves and our beloved ones from being infected. And it’s not just that, since it has been proven that Islam encouraged these measures and precautions, we get rewarded for submitting to our religious teachings and instructions.

Noor Academy ( house of Quran ) offers premium quality learning that makes your children learn and enjoy their time at the same time.

There’s a special section for online classes for kids that you can choose a topic from.

PreviousHow To Raise Children Who Love Online Quran classes ?
NextHow To Introduce Allah To My Kids?