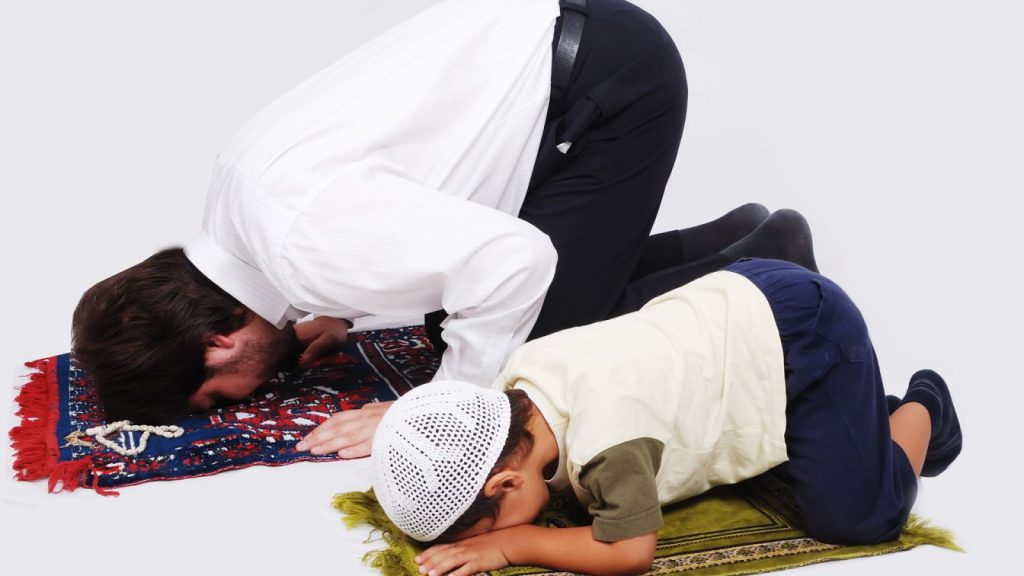 prayers to teach your children? Salah Full Guide, All Muslims are taught within the religion that we were created just to worship Allah SWT, and by performing salah, we fulfill our purpose in life. That’s why we should teach salah (prayers) to our kids. But how?

Noor Academy has made a simple complete guide for you to introduce your kids to salah. Keep reading to know more!

Salah is a particular form of devotion that, after the shahada, is the second most fundamental pillar of Islam (testimony of faith).

It is a five-times-a-day mandatory form of prayer given in al Quran al Kareem and taught to us by Prophet Muhammad (Peace Be Upon Him).

With a variety of physical actions such as standing, bowing, prostrating, and sitting, the salah unites you with Allah SWT.

It also entails reciting passages from the Holy Quran in Arabic, as well as reciting a number of dua (supplications).

Muslims begin salah by facing the direction of the Kaaba, Allah’s Sacred House in Makkah, whenever they pray.

All of these physical gestures, recitations, and supplications are performed to demonstrate humility and obedience to Allah SWT.

Why Do We Pray?

The reason Muslims pray at all is that Islam believes that the aim of life is to worship Allah SWT alone.

The observance of salah (worship) was one of the first commands revealed to prophet Muhammad by Allah shortly after he became a Prophet.

Allah Almighty tells us in the Holy Quran that mankind was only created for one reason: to worship Him.

“And I (Allah) created not the jinns and humans except they should worship Me (Alone).”

In Islam, the mandatory prayers are five that should be performed throughout the day. A Muslim who fails to perform these prayers with no valid reason is considered a sinner.

Our beloved Prophet (Peace Be Upon Him) said:

“Between a man and polytheism and disbelief, there stands his neglect of the prayer.”

Other additional prayers that are also notable in Islam:

who misses two consecutive Jumuahs is considered a sinner.

In Islam, Nawafil prayers are supererogatory prayers. They, like sunnah prayer, are not considered obligatory.

but are thought to bestow an additional advantage on the individual who does them. According to Rabi’ah ibn Malik al-Aslami, the Prophet (Peace Be Upon Him) said:

These Nafl prayers include:

“The best prayer after the obligatory prayers is the night prayer.”

When the sun is shining brightly, it is a late-morning prayer.

How To Introduce Prayer (Salah) For Kids?

Lots of parents ask about the best way to introduce their kids to Salah and how to make it an unconscious practice of their daily lives.

This can be achieved by following these tips below:

Because your child observes and absorbs your actions more than your words, the example you set as a parent is critical. Even though it appears that your children are not following your example, they are, and it will be stored in their memory banks even after they grow up.

Make sure they see you praying Fajr on time, then praying Dhur or Asr when you get home from work even if you’re tired, then praying Ishaa when it gets dark, and so on. Salah will be engraved in their minds as an important practice that should be respected no matter what.

Even when you’re outside for a picnic or a road trip as a family, tell them that being outside is not an excuse to miss Salah. Use their help to find a good spot to pray and perform prayers in front of them.

Examine how you feel about salah and if you have a warm and good attitude toward it. You’ll be able to convey a welcoming and pleasant attitude regarding salah to your children this way. Don’t lazily get up to pray and don’t look annoyed when you do it.

This is also important for when you ask them to pray. Don’t wake them up for Fajr with annoyance saying things like “if you don’t get up now you’ll miss Fajr and you’ll be punished!” instead, use the most peaceful patient attitude with it.

Stories about Salah and Jannah are a great way to get your children excited about praying. Tell them how Allah SWT prepared amazing things for those who pray to gain his acceptance. Use your imagination to portray the perfect dreamworld for them as Jannah.

Make sure to never tell them frightening stories about the punishment of salah abandoner. Many Islamic studies for kids teachers used this method in the past thinking it would encourage children to pray but in fact, it backfired.

When you initially start salah teaching, you don’t want your child to associate prayer with punishment. Instead, tell your children of Allah SWT’s enormous love for them and how grateful we are to Him for all we have.

Yes, there are rules for performing salah, and you must gradually educate your children on the fiqh of salah. Simply begin with the most important rules and gradually add additional as they complete the previous steps. Have sympathy for your children and teach them with kindness and understanding, especially while teaching salah to them for the first time.

Be patient and keep in mind that you want your child to make salah a habit. To know that they may get consolation in salah, resulting in a stronger desire to pray. You want your child to understand that salah is a must, not an option and that it is an essential component of being a believer and having faith.

How To Pray In Islam Step By Step?

In order to teach your children how to pray correctly, after familiarizing them with the concept of salah and why we pray, you need to take salah step by step for them to understand.

First, they need to make correct wudu. Take them by the hand and perform wudu step by step and ask them to imitate you. Here are the steps you should follow:

There are no particular words or remarks that need to be made here. It is a matter of the heart and intellect to create the purpose.

This is a critical phase in the wudu-making process. We must say Bismillah before we begin washing. (In the Name of Allah). You may say it to yourself quietly.

The Prophet Muhammad (PBUH) told us to start with our right side. That implies you’ll have to wash your right hand three times from the fingers to the wrist. Make certain that the water hits every part of the hand. After that, repeat the same moves three times with your left hand.

Rinse your mouth three times with water taken in your right grip. Do this thoroughly to ensure that no food or dirt remains in your mouth.

Three times, snort or inhale the water into your nose and then blow it out. If you take in too much water, you may injure yourself, so be careful.

Every part of the face must be cleansed. That is, from ear to ear and from the top of your forehead to the bottom of your chin. Repeat this procedure three times.

Wash your right arm three times from the fingers to the elbow. Make sure that there is no area left dry. After that, repeat the technique three times with your left arm.

a wet hand on the first sections of the hair is enough. This is only done once.

We will also wash our feet three times as we did with our hands. Begin with your right foot’s toes and work your way up to and include your ankle.

Ensure that water hits every part of the right foot, particularly the area between the toes and the back of the ankle.

This is done only once and then repeated for the left foot.

To imitate Prophet Muhammad (PBUH) we say Shahada and dua after we’re done with wudu. He used to say:

Following this sentence, he would recite the following dua:

After making wudu, it’s time to perform salah. Here’s a list of simple steps you can use as a guide to help your children learn how to pray:

Before you begin, block out any distractions and noises to allow your mind to clear. Your complete attention should be on the prayer and nothing else.

We began the prayer, like wudu, by making a heartfelt intention to pray to Allah SWT.

The prayer will begin as soon as you say “Allahu Akbar.” From now on, you should concentrate solely on the prayer and try your hardest to disregard all distractions.

(4) place your hand over your naval

After Takbir, you place your right hand on your left hand both over your naval and start reciting Quran Kareem.

Your eyes should be fixed on one spot, which is the very front of you where you’ll prostrate.

First, you recite Fatiha, then, you pick any short Surah you memorize from al Quran al Kareem and recite it afterward.

Say ‘Allahu Akbar’ as you bow down. Maintain a straight back, hands on your knees, and your eyes fixed on the ground where you will be prostrating.

As you rise from the ruku to the standing posture, raise your hands to your ears and say Samee Allahu leeman hameeda.

After saying ‘Allahu Akbar’ again before prostrating, make sure your forehead, nose, palms of both hands, knees,

and both toes are touching the ground and say Subhanna rabbiya al alaa.

(9) Rise up to sit down before making the second Sujud

Before making the second sujud, you should rise up from the ground, sit down, and say Rabbigh-fir lee. Then, repeat Sujud.

After the first two rakaat, recite this first part of Tashahhud:

After the second (last) two rakaat, recite the whole Tashahhud, adding this part as well:

After reciting Tashahhud, make Tasleem as the end of your salah by looking to your right and saying: “Assalamu alaykum wa Rahmatu Allah”

and then to look to the left and say it again: “Assalamu alaykum wa Rahmatu Allah”

When Should You Start Introducing Salat To Kids?

In terms of fiqh, parents should start teaching their children to pray at the age of seven, and by the age of 10, they should apply discipline if necessary. This is a parental responsibility (wajib).

In terms of general parenting, parents should encourage and praise their children to pray from a young age. As with many great and moral activities, it is made simpler if the parents pray at home on a daily basis, as children love to imitate what their parents do.

All the preparations end at the start of puberty. All religious responsibilities, and accountability in general, begin at puberty for the children: at that point, all five prayers must be completed on time.

How To Encourage Kids To Pray (Salah) So It Becomes A Life-long Habit?

Benefits of Salah in This World

It is essential to list the various benefits of salah in order to instill a love of salah in your children’s hearts. Try to simplify and explain the following principles to them while you go about your regular activities.

Some of the several advantages of salah include: